A study on the banality of evil.

Peer into the private spaces of violent far-right actors.
A First Vigil project.

Racist, white supremacist, and far-right violence is on the rise. But while far-right actors often try to maintain a public image of normalcy, it is sometimes useful to look into their private spaces in an attempt to understand how their hate festers, evolves, and breeds when no one is looking. HowHateSleeps seeks to peek behind the curtain to look into these private sanctums. All images have been pulled from public court records except where otherwise indicated. This project is part of the First Vigil initiative.

The Terrorist was a security guard with a history of abusing his disabled mother. An avowed neo-Nazi known by his former classmates and peers as a virulent racist, he crossed state lines to attend a political rally, where he decided to commit an act of premedidated domestic terror by driving his car into a group of counterprotesters, killing one. He is serving multiple life sentences for state and federal crimes for hate-crime murder and malicious assault. 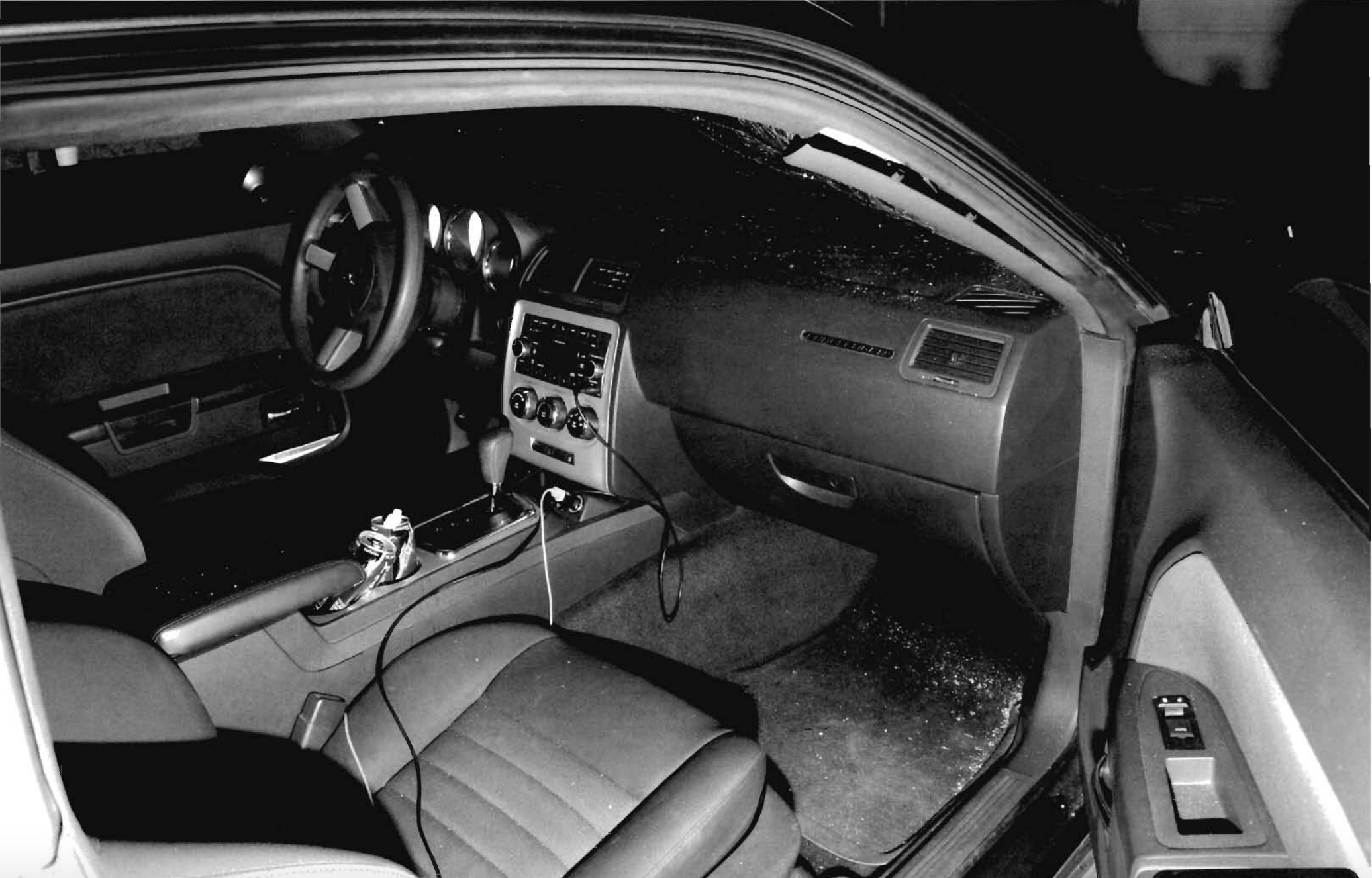 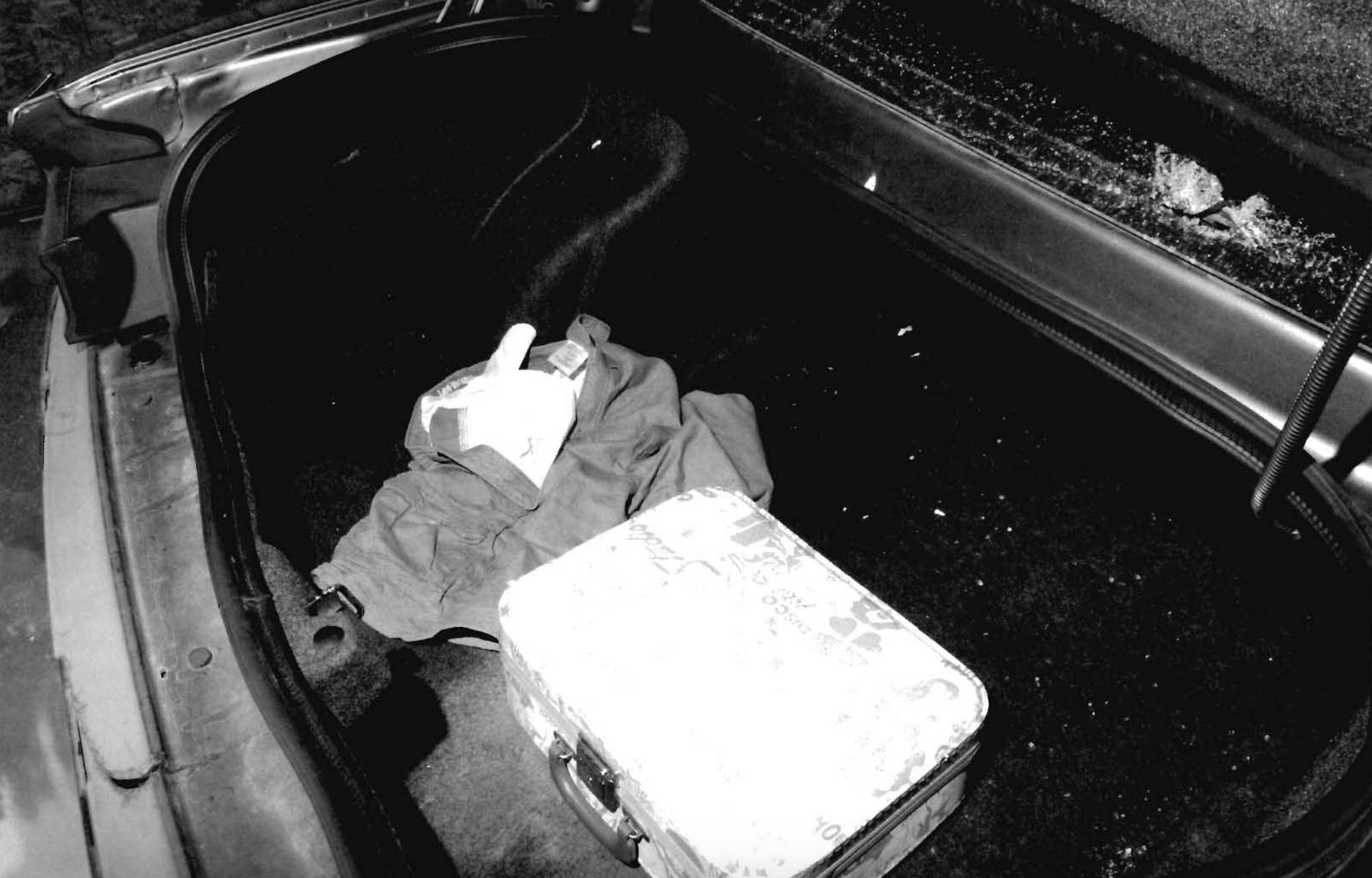 The Terrorist’s weapon of choice was his vehicle, which is otherwise mundane in its normalcy. USB chargers and an aux cord wind around crushed energy drink cans, a familiar sight to anyone who has driven the vast American countryside. In his trunk, a change of shorts and a suitcase containing a work uniform, a sign of every intention to return home from a hate rally and go back to work like usual. 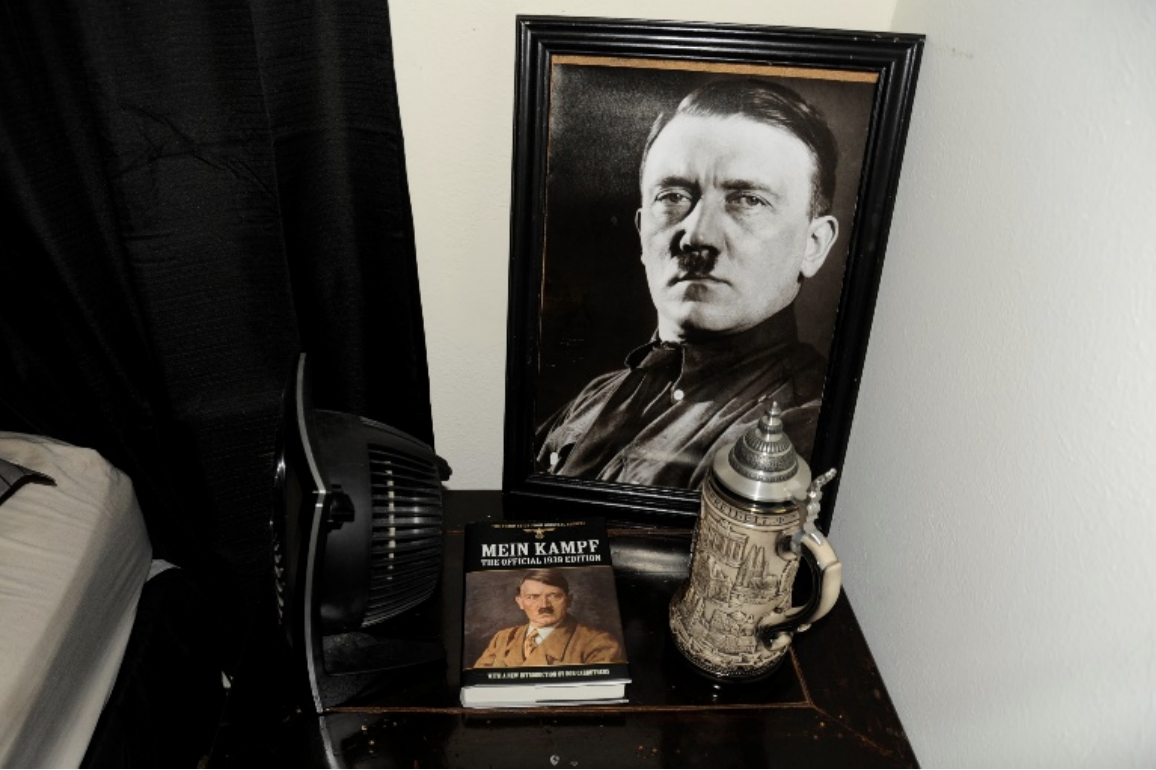 At home, The Terrorist’s first love was for Adolf Hitler. A copy of Mein Kampf lay on his bedside table, a large portrait of Adolf Hitler leaning against the wall. 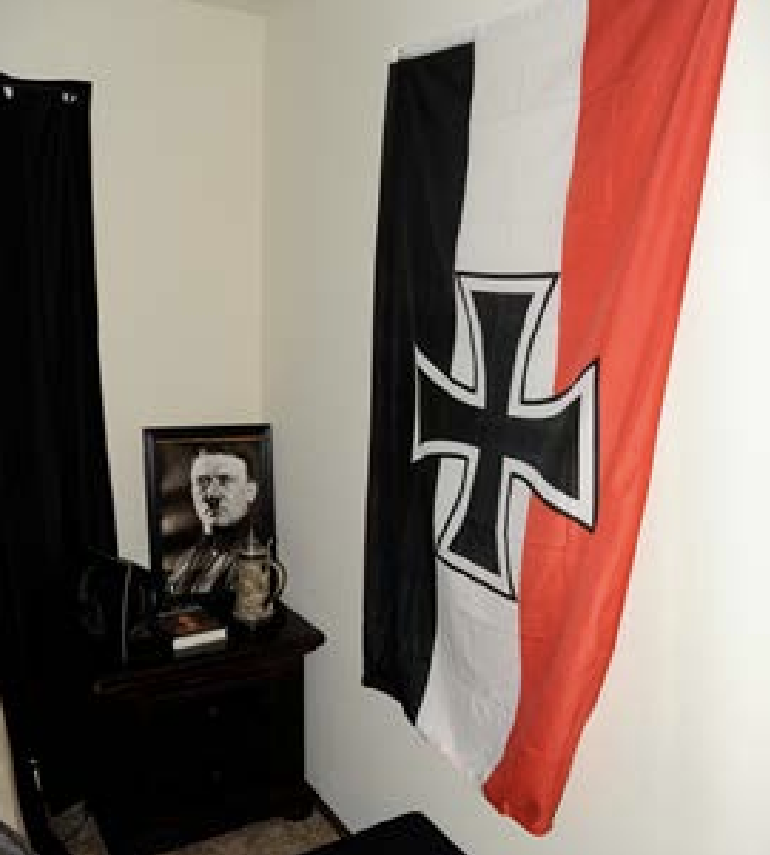 The Terrorist’s affinity for Nazi Germany was on full display, with a Nazi battle flag adorning his wall. While some young men his age might have posters of cars or favorite musicians or attractive celebrities, The Terrorist had only obsession: the legacy of the short-lived but extremely genocidal empire of the Nationalsozialistische Deutsche Arbeiterpartei.

The Officer worked in Washington D.C. as an Acquisitions Officer for the U.S. Coast Guard. Investigators found documents on his computer that indicated he was plotting mass murder on an unprecedented scale. He worshipped Anders Brevik, made a list of targets which included politicians, media figures, and activists, and attempted to contact well-known white supremacists. Computer records show he once found a media personality’s former residence and spent 35 seconds zooming in and out on the house on an online mapping tool. According to the US Attorneys prosecuting the case, he intended to ‘murder innocent civilians on a scale rarely seen in this country.’ 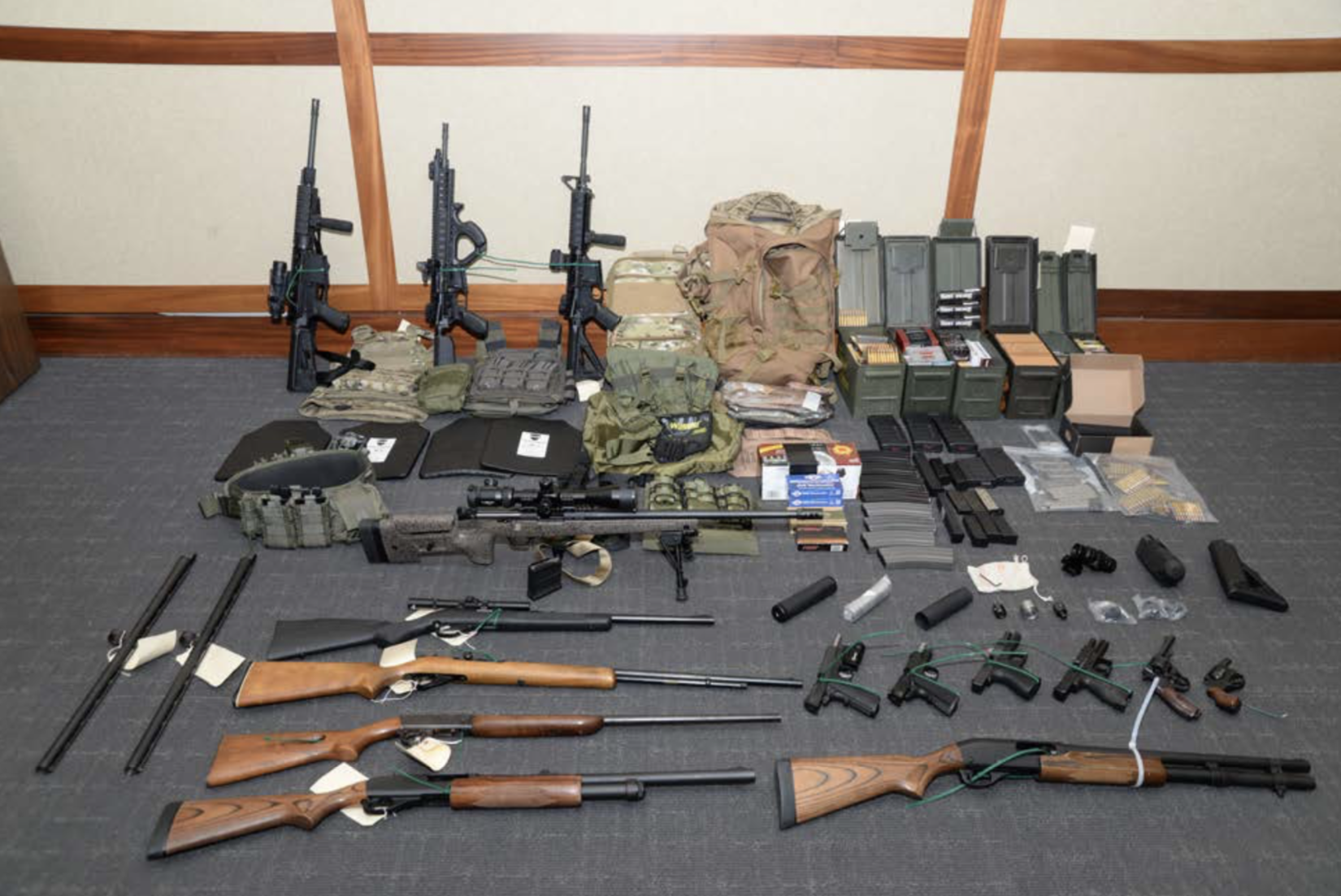 When investigators searched his residence, they found that The Officer had a cache of over a dozen firearms and over a thousand rounds of ammunition in his ‘cramped basement apartment’ in Maryland. Not all of his weapons have been recovered. 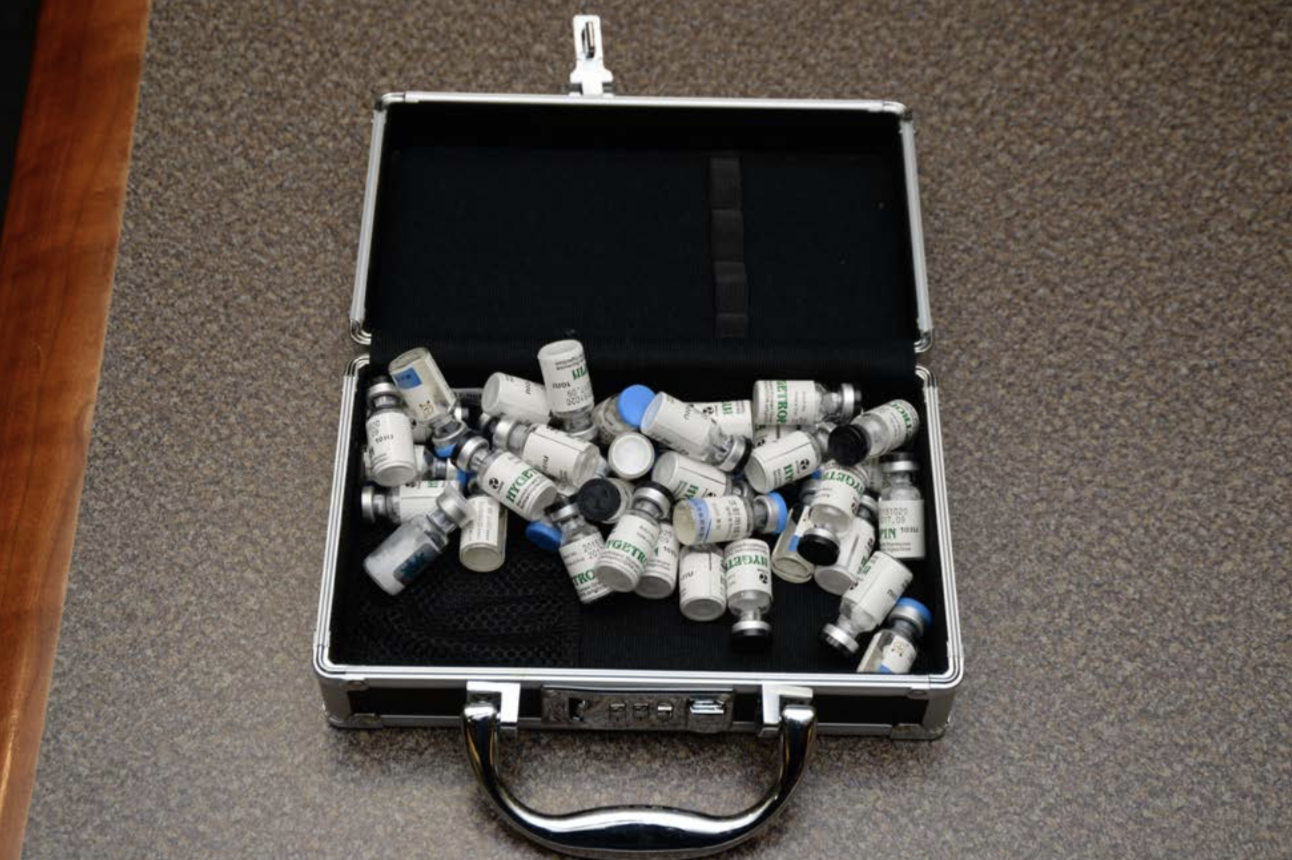 The Officer was also allegedly addicted to Tramadol. Investigators found over a hundred pills of the drug along with over thirty vials of HGH, allegedly illegally imported from Mexico over the internet. His charges include owning firearms while addicted to a controlled substance.

The Guardsman was the founder of a violent neo-Nazi group and is skilled in making explosives. His goal was to start an exclusive and violent group of far-right activists who would eschew public rallies and images, instead focusing on individual violent acts intended to bring about the start of a race war. One of his roommates killed his other two roommates while he was away on reservist duties; upon returning, he gathered several weapons and headed toward a nuclear power plant with his best friend, another avowed neo-Nazi. 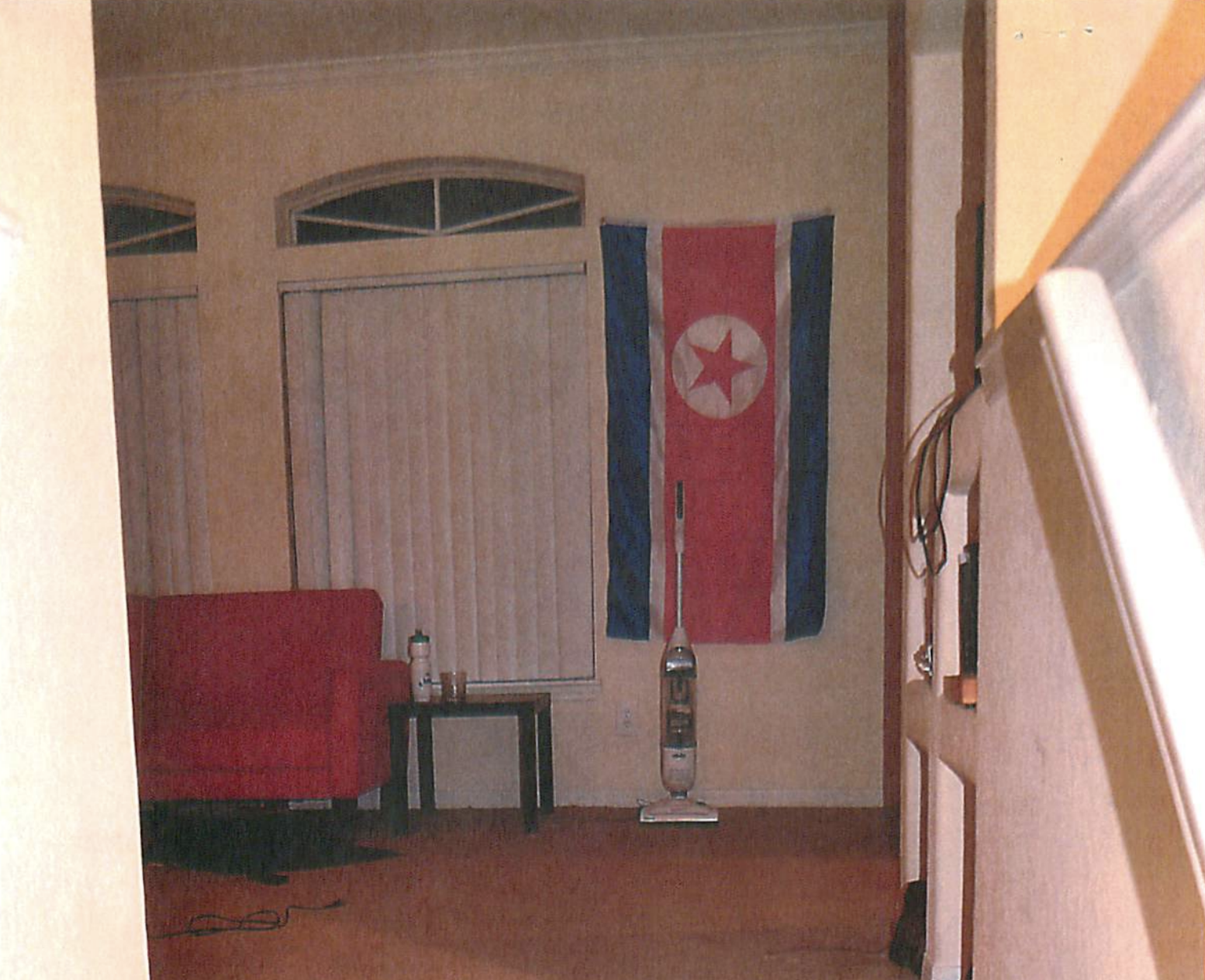 The Guardsman lived in a rental flat noteworthy only for how incredibly typical it is in American life. A bag of charcoal bricks for grilling. An upright vacuum to clean the beige carpeting. One’s understanding shifts when one recognizes the only visible wall art are the flags of North Korea, and an obscure neo-Nazi group. 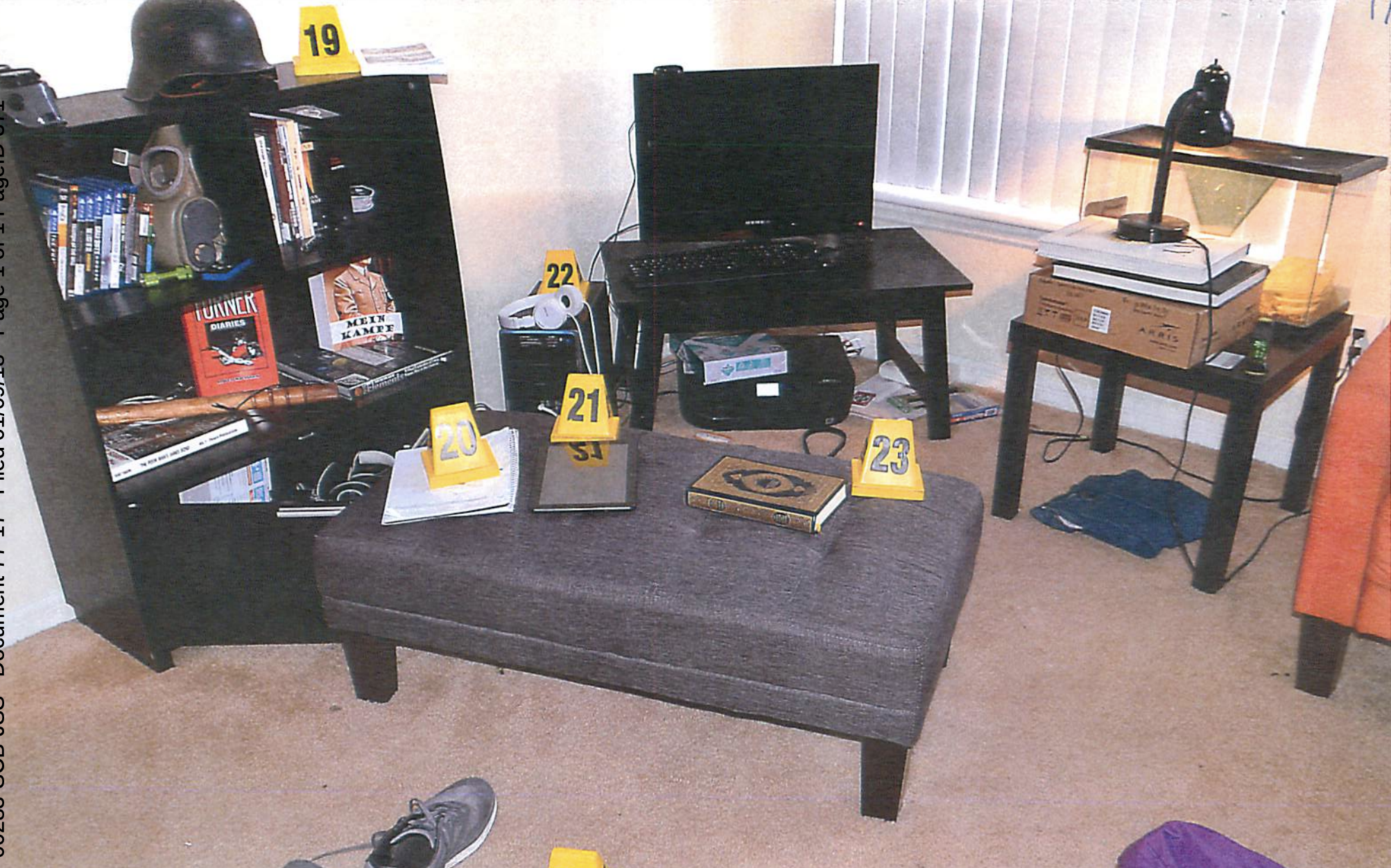 A living room contained a bookshelf containing fascist and racist literature side-by-side with a video game collection and a vintage gas mask. A terrarium stands in contrast to the copies of Mein Kampf and The Turner Diaries on full display. 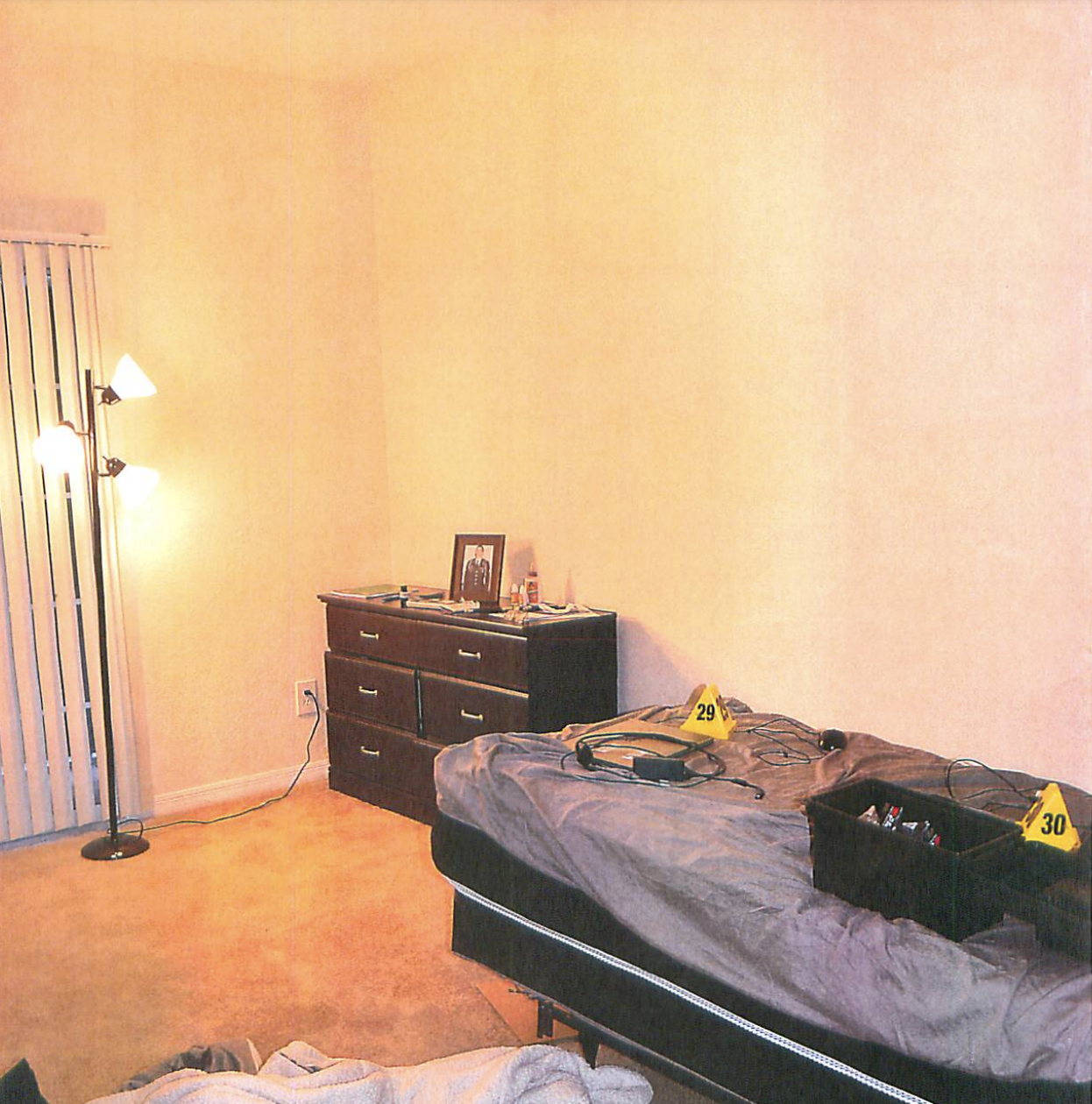 The Guardsman’s bedroom is typical of an American 20-something bachelor, until one realizes that the portrait on the dresser is of the Oklahoma City bomber, Timothy McVeigh. 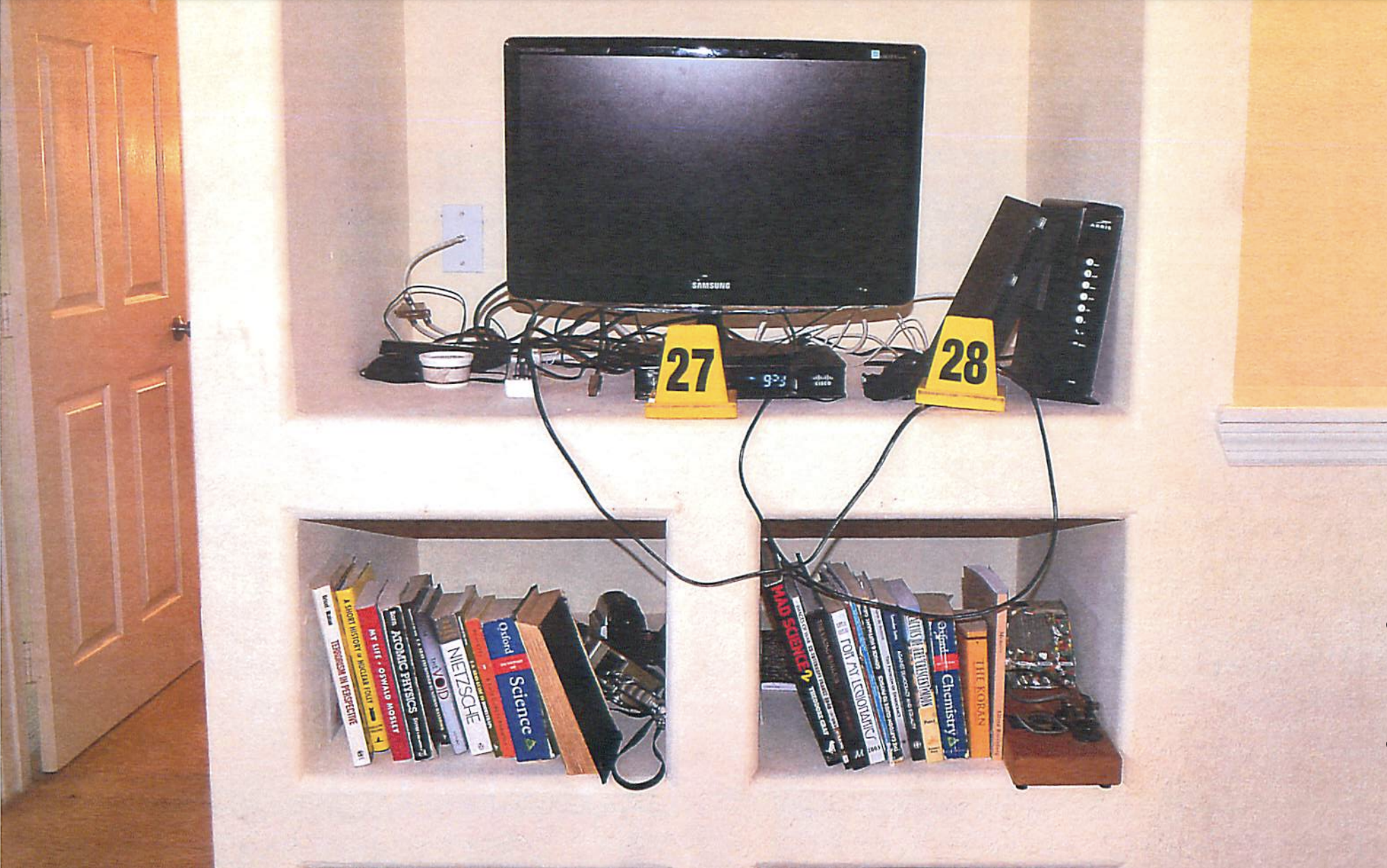 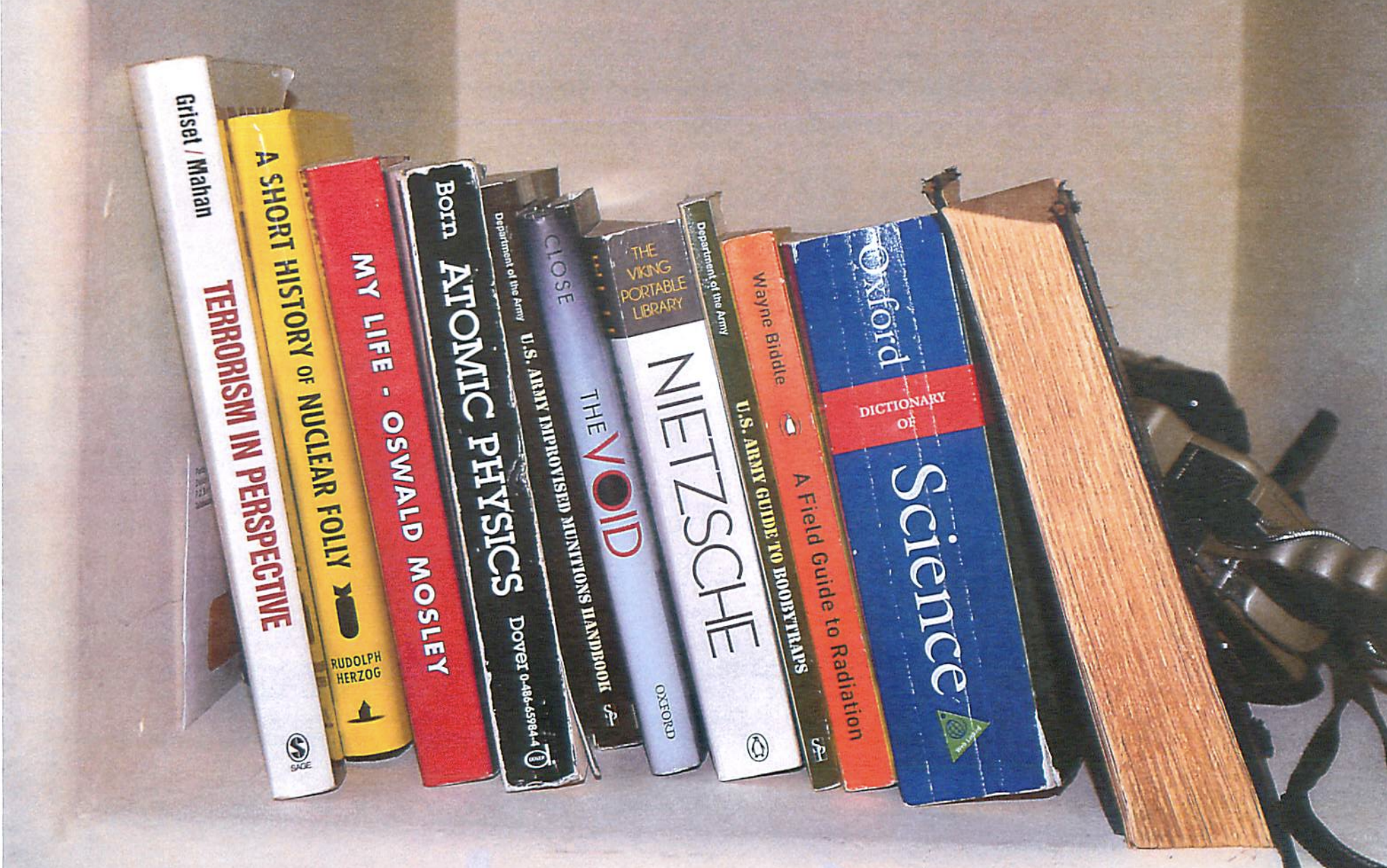 Built-in shelves beneath a clutter of wires and electronics hold copies of books on chemistry, atomic physics, philosophy, fascism, and terrorism. The biography of the British fascist Oswald Mosley stands out. 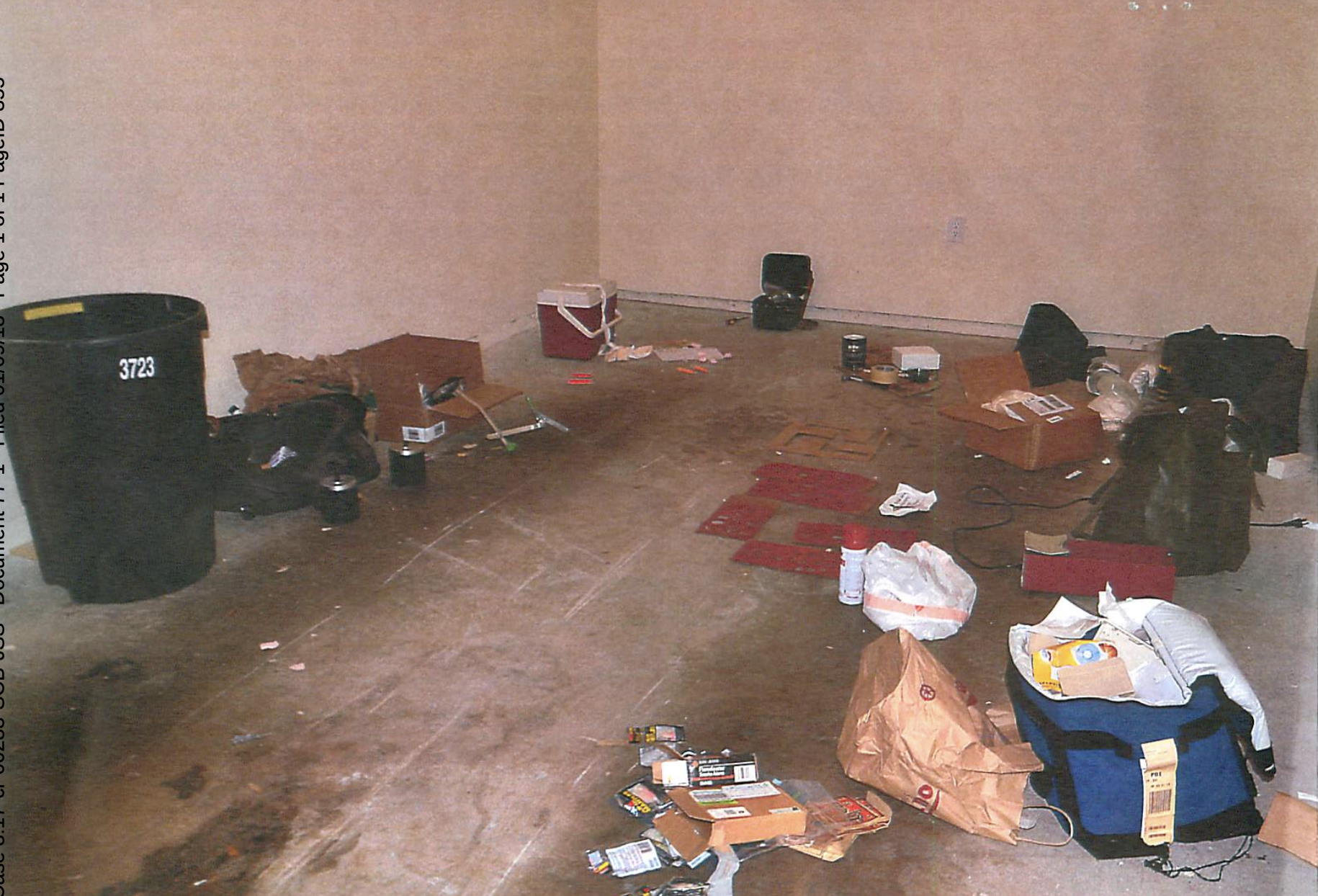 The garage was The Guardsman’s laboratory for crafting explosives. Barren except for some trash and camping equipment, the garage offered plenty of space for The Guardsman to make highly-unstable and potent explosive materials.

The Shooter’s Friend lived in a state of squalor and filth, surrounding himself with a visual cacaphony of hateful effigies. With known ties to the alleged perpetrator of a synagogue mass murder, The Shooter’s Friend also lost his brother to suicide that same day; the brother was also found with a firearm and several loaded magazines. The Shooter’s Friend was turned into the authorities when his family members became concerned with his increasingly erratic and troublesome behavior. He has a plea hearing scheduled for a federal firearms possession violation. 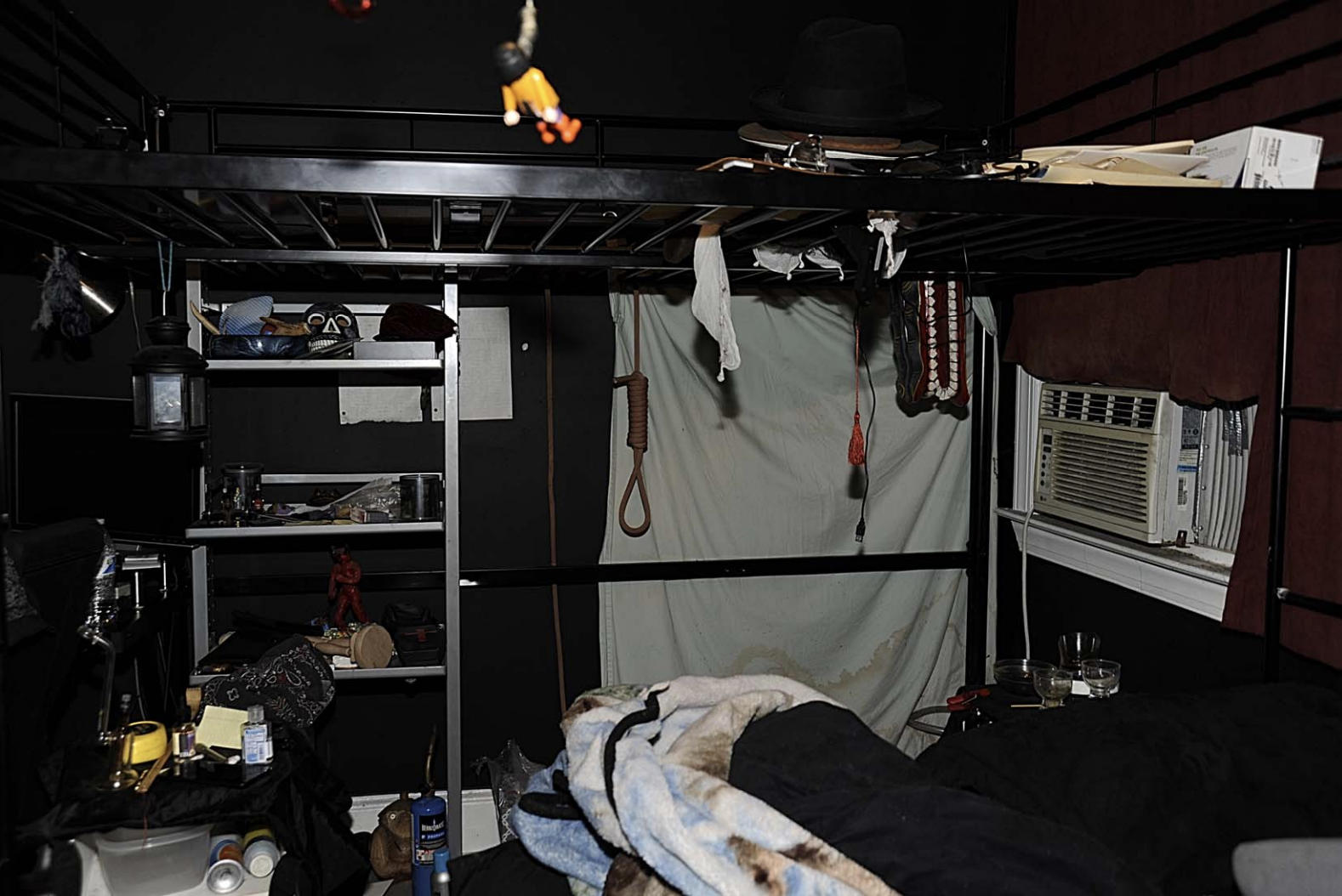 A disturbing scene, The Shooter’s Friend’s bedroom is filthy and dark. Nooses hang from below a lofted bed; one holds a small action figure. A waterstained sheet covers a window; beside it, an air conditioning unit is covered in dust and mildew. 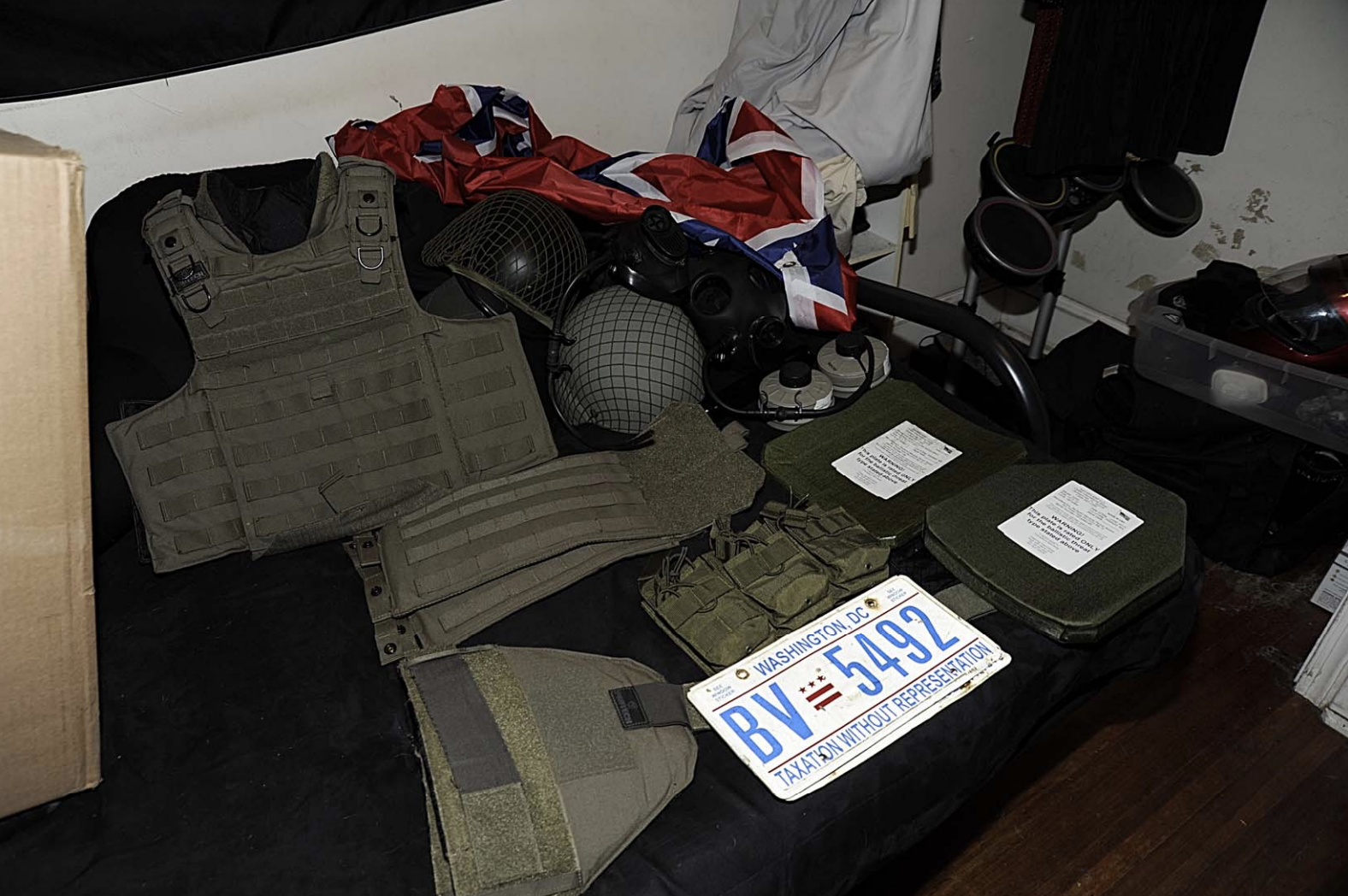 Body armor and tactical gear have pushed aside a Rock Band drum kit. Dirt and grime turn the white baseboard trim brown. A Confederate flag is crumped and tossed in among a collection of soldiers’ helmets and gas masks. 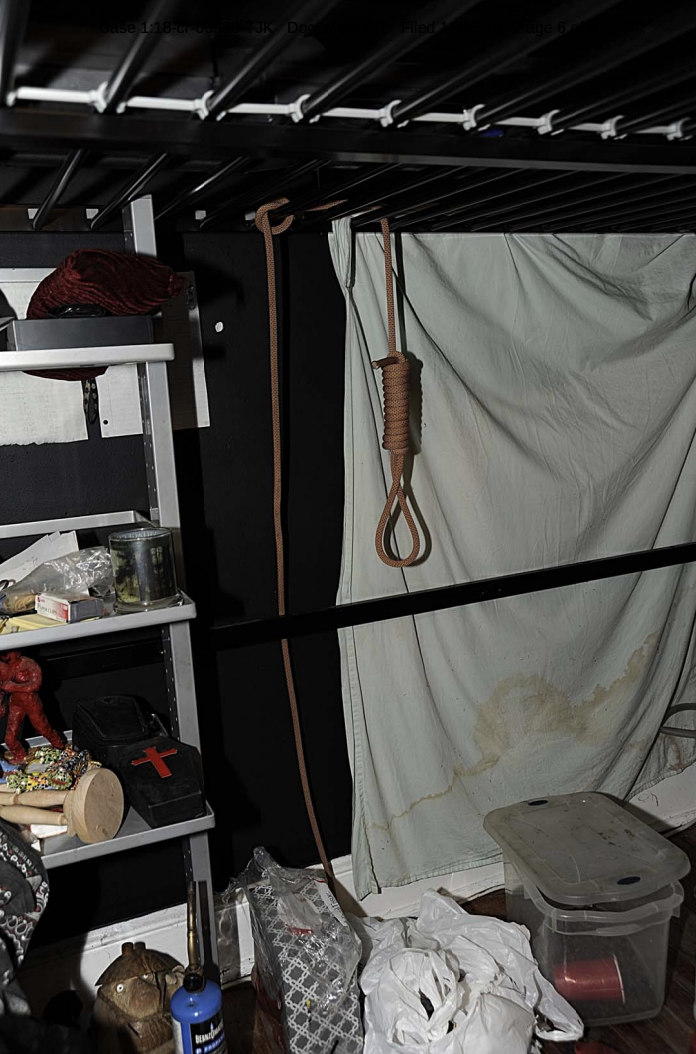 The Arsonist was a young man who, together with his teenage wife, learned how to make chemical bombs and eventually vandalized a synagogue. The Arsonist’s wife was more radical than he; she has been linked to a series of vandalism incidents at houses of worship throughout her surrounding area. The arsonist had an affinity for Naziism and desperately wanted to belong; he and his wife were recruited to a white nationalist organization shortly after their synagogue attack. The Arsonist is spending three years in federal prison for his hate crime attack. 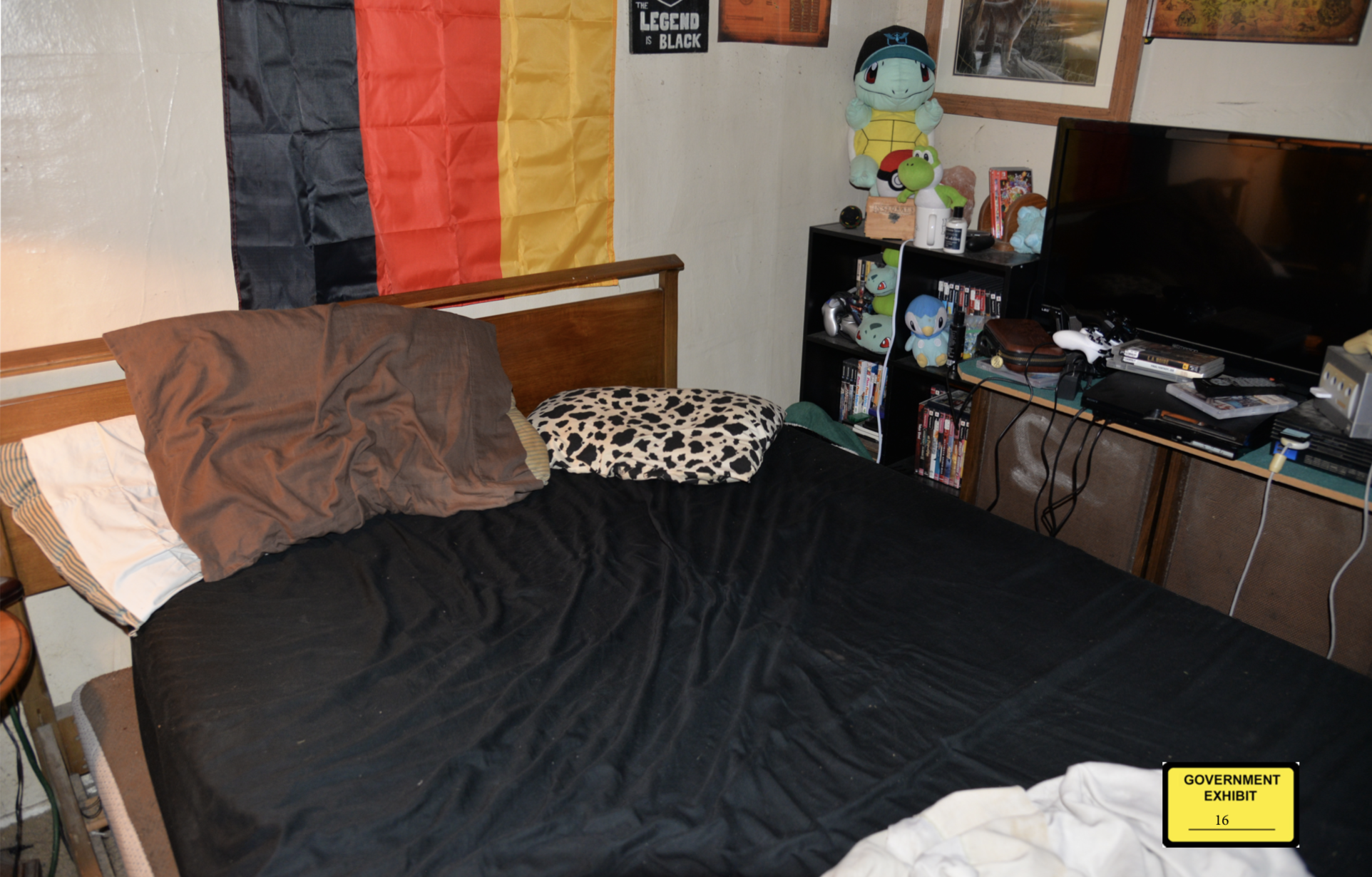 The Arsonist’s youth might seem like a cover for his bigotry. His bedroom is full of child’s things: stuffed animals, a video game console. Nevertheless, his innocence is but a show. A modern Bundesrepubilk Deutschland flag hangs over his bed, perhaps a stand-in for the former Third Reich, or perhaps a deep misunderstanding of history. 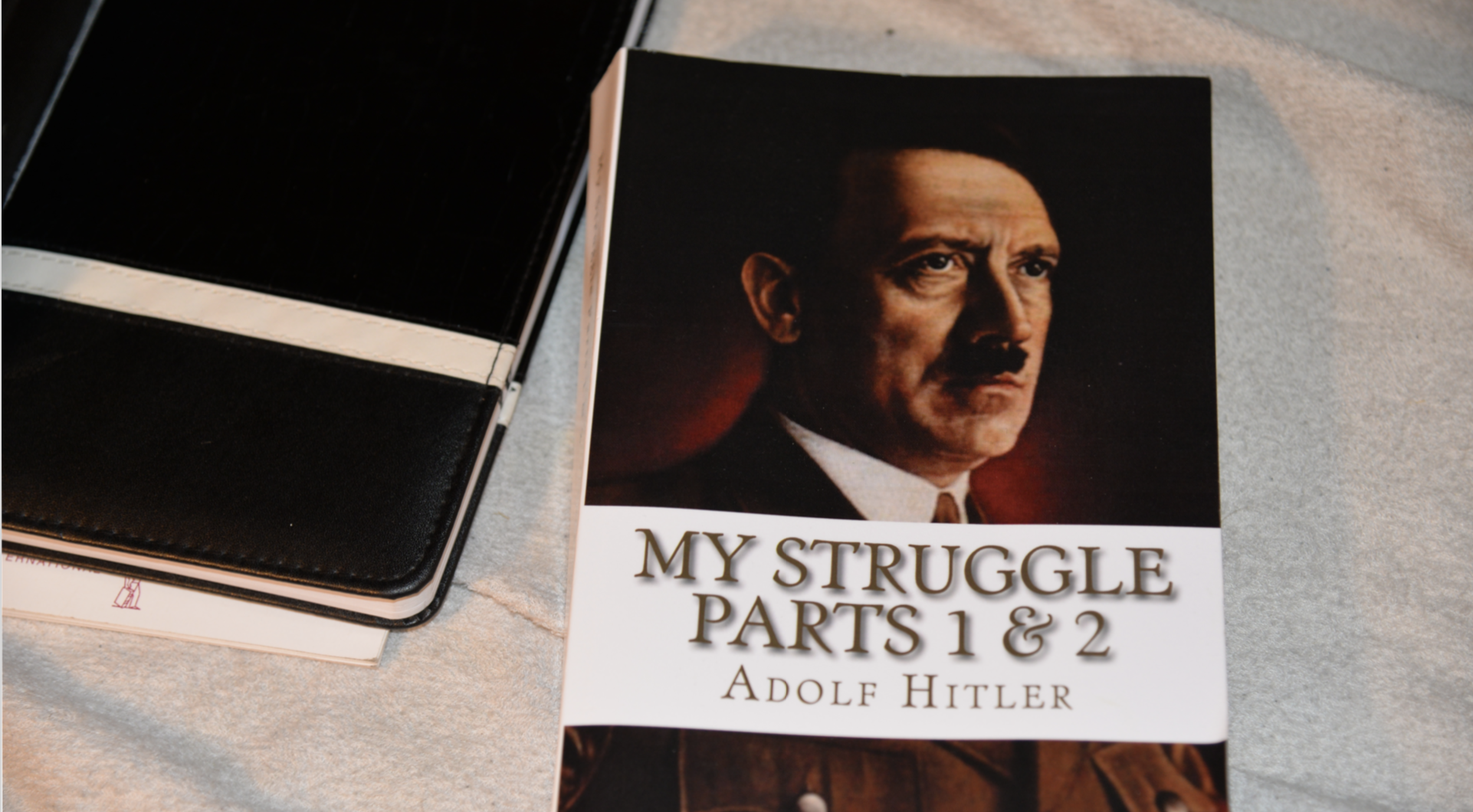 His love for Naziism, like so many others’, naturally involved a reading of Mein Kampf. The book is pictured alongside a notebook, perhaps as the inspiration for his uncertain philosophy of ‘national corporatism’ that he eagerly told his friends and minders in the white nationalist group. 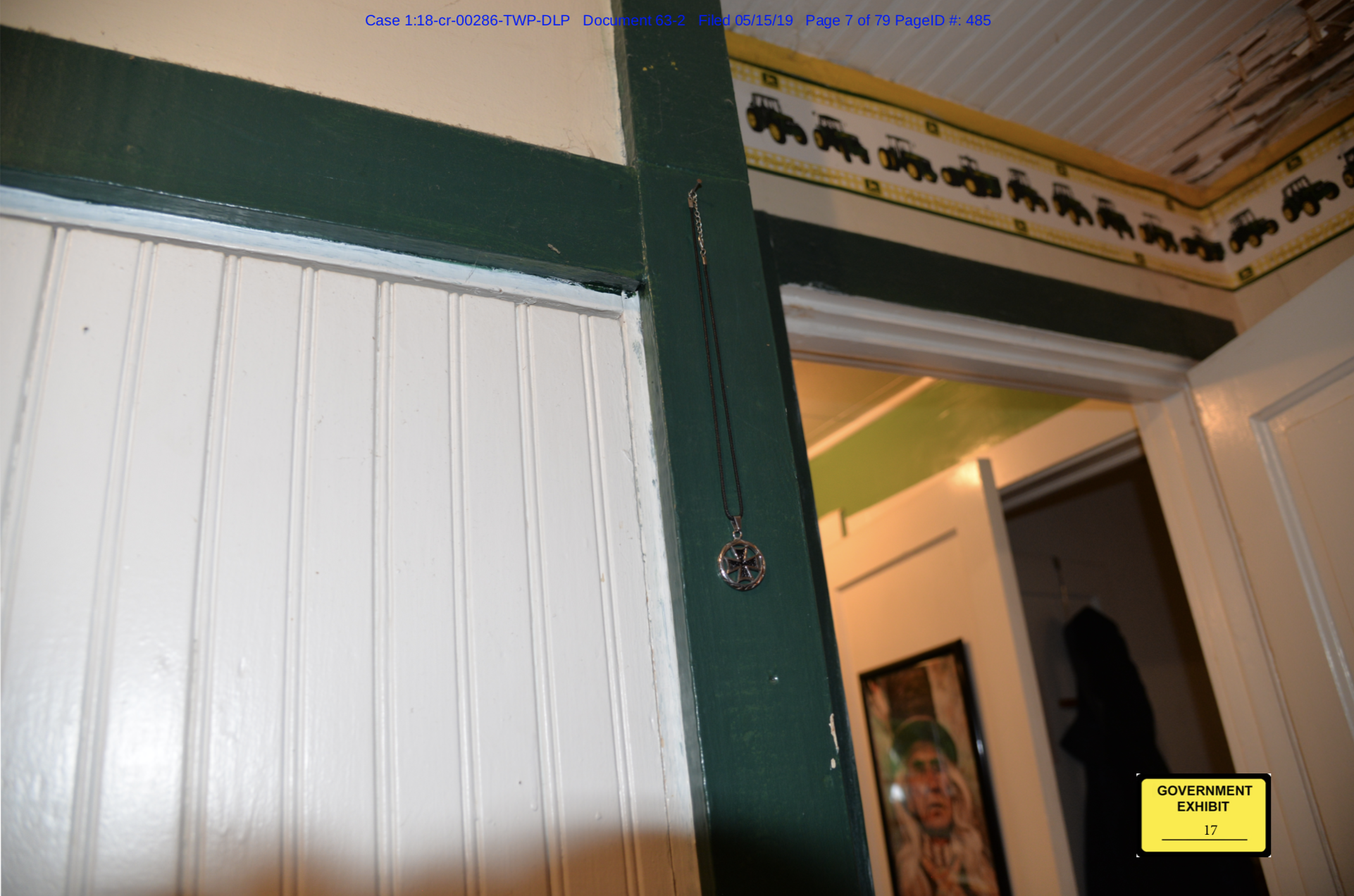 The Arsonist’s bedroom retains its nursery-like qualities; a wallpaper borded with a tractor motif sits above an iron cross pendant that The Arsonist often wore. 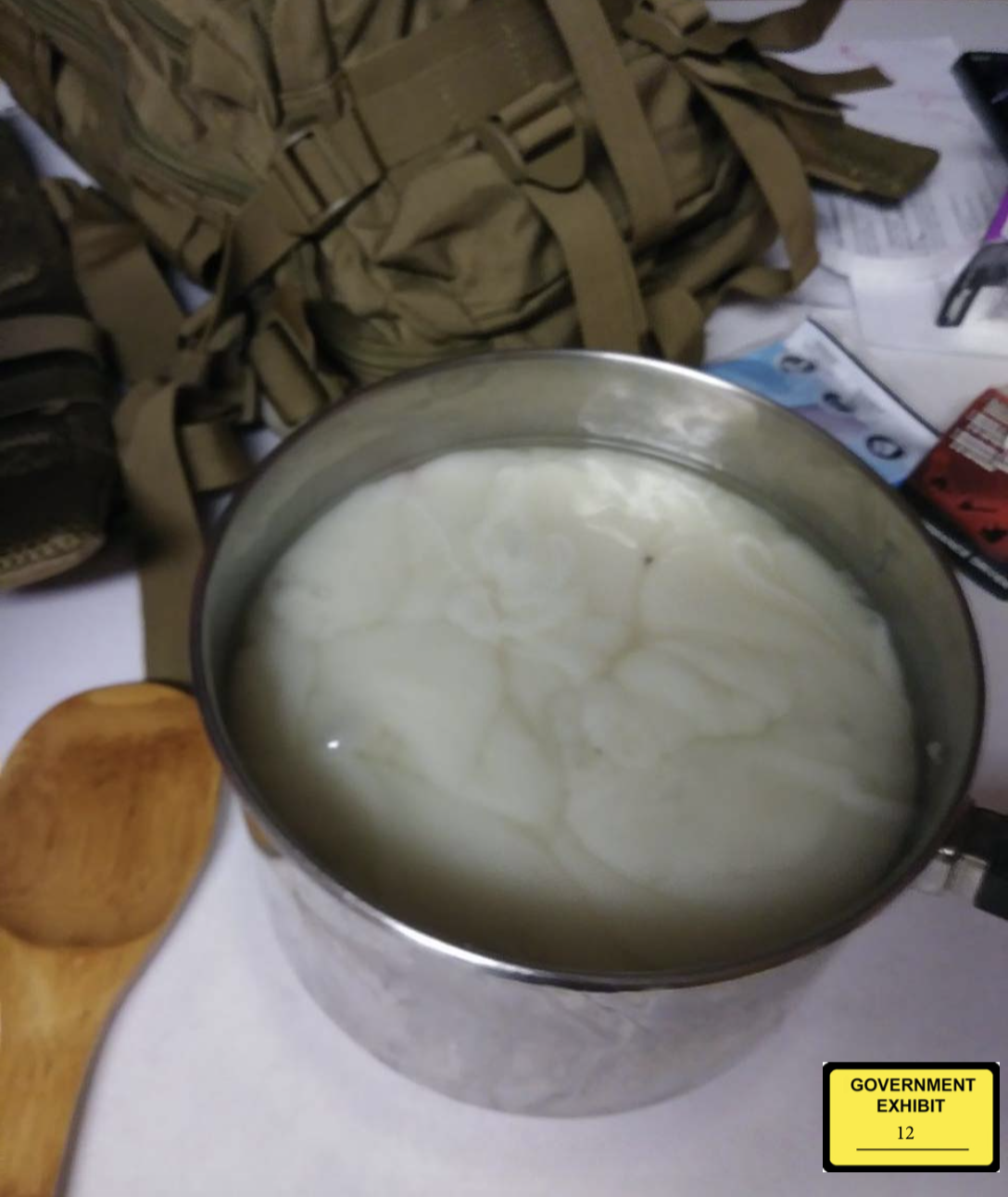 The Arsonist regularly experimented with explosives, creating makeshift concoctions in his kitchen. He and his wife managed to light a fire at the synagogue they attacked; to his dismay, his attempt at creating a ‘Drano bomb’ failed. Nevertheless, he kept the bomb-making materials in his car for weeks, key evidence that helped seal his indictment. 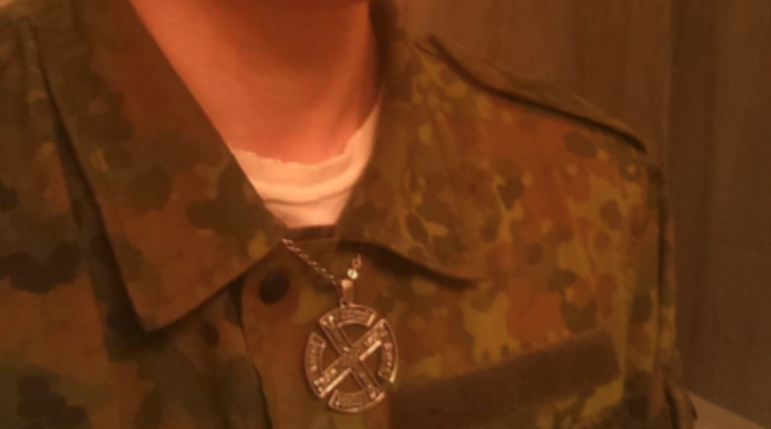 The Arsonist modified a celtic knot pendant into a circular swastika. He wore this frequently, openly, and proudly.

The Brother was a suspected white supremacist gang member who was found illegally possessing firearms and explosive materials. The Brother had previous convictions for drug trafficking and breaking and entering, and was forbidden under federal law to possess firearms. When investigators searched his property, they found several firearms, including a machine gun. 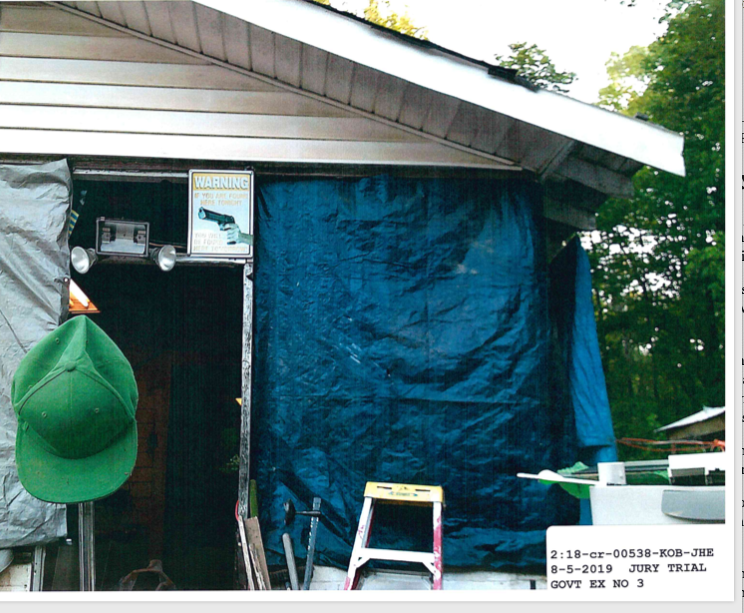 The Brother’s house reflects the deep poverty that intersects with southern white power gangs. A tarp covers an area where a wall should be. Above it, a sign with an image of a gun warning off would-be trespassers or robbers. 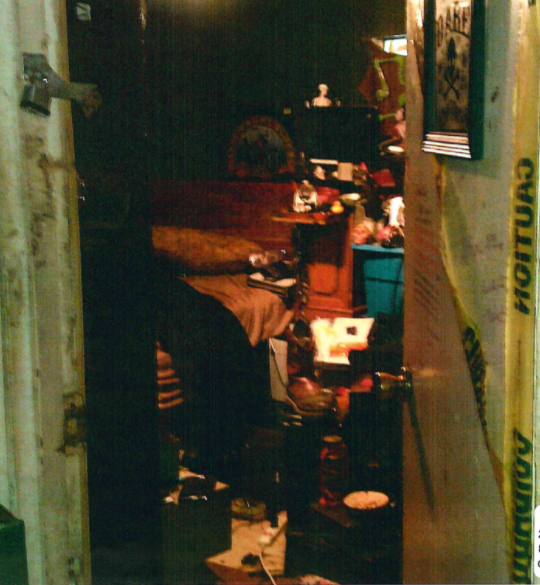 The Brother’s bedroom was dim and messy. A bowl and a cowboy boot rest on some boxes. 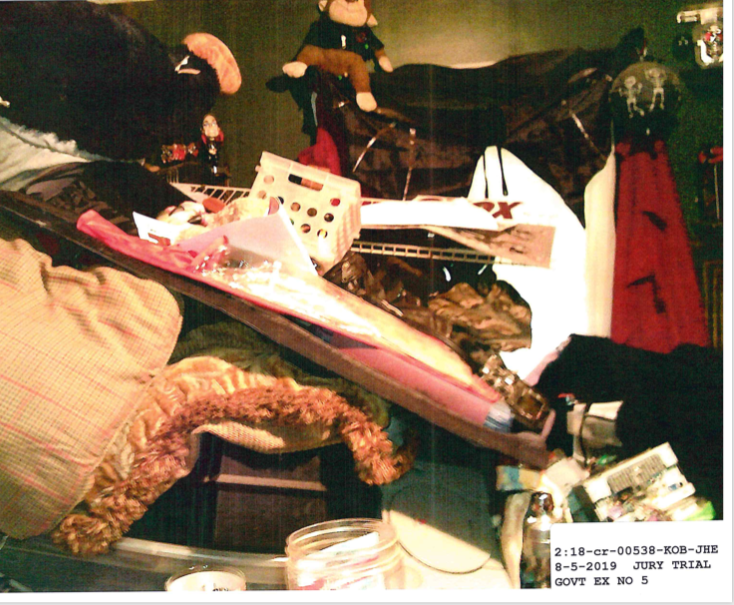 The Brother’s house was full of objects strewn about. Amidst it all, investigators found firearms, ammunition, and even suspected detonator cord. A Playstation rests under a fallen closet shelf.